The early years of life have a great influence on children’s later development and China’s large population of children includes many disadvantaged children from poor families or those who are separated from parents who migrate to cities for work. An early childhood development monitoring tool developed by researchers at the Telethon Kids Institute has been adapted for use in China and easily implemented in a number of districts and counties, both urban and rural, to better understand, monitor and work to improve children’s early development.

When it came time for the developed coastal province of Zhejiang, south of Shanghai, to assess the progress in its three-year action plan for early childhood education, the early Human Capability Index (eHCI) was chosen to monitor their progress.

The eHCI was developed by the Telethon Kids Institute as an open-source instrument which is provided free-of-charge for use anywhere in the world. The tool is designed to be simple and easy to use, while providing reliable information on children’s development.

In China’s Zhejiang province, the eHCI was used to collect development data on children from 429 kindergartens randomly sampled in 29 counties/districts across the province. The survey was completed by parents and caregivers of children mostly aged between three and five years.

The Education Bureau of Zhejiang Province commissioned researchers from the China Institute for Educational Finance Research (the Institute), based at Peking University in Beijing, to conduct the performance evaluation and they were responsible for choosing eHCI as their preferred population level monitoring instrument.

“I tried to use some other face-to-face instruments and I found it quite expensive and time-consuming,” said Associate Professor Yingquan Song PhD, from the Institute.

The Institute implemented the eHCI via an online survey system and once parents and caregivers scanned a code, they had access to the eHCI survey questions. It took parents in Zhejiang province approximately 10 minutes to complete the survey by smart phone, tablet or desktop computer. 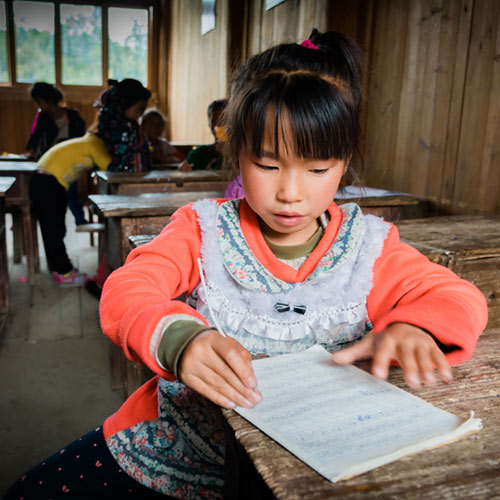 The eHCI had already been adapted for use in China by the China Development Research Fund, including translating the tool into Mandarin and adapting it for use in the Chinese cultural context.

As well as providing a foundation for the Zhejiang province to continue investing in their three-year plan, the eHCI results have provided valuable insights into where to target spending.

The findings also demonstrated that kindergartens in Zhejiang are playing a critical role in helping disadvantaged children catch up with their peers.

“Disadvantaged children, if we compare their age, it seems for a younger age, there are huge developmental gaps,” Assoc. Prof. Song. “(However) for the older children, especially for this rural and urban development gap, that’s narrowed.”

“Also, for migrant children, those who left from their hometown and they migrate to the city well these children normally are marginalised. But we can say for older children who are in kindergartens, they adapt or there is a kind of catch-up effect by being in kindergarten, so that is a good finding.”

Assoc. Prof. Song has also used the eHCI to collect data from about 60,000 children from 12 counties each in the two least developed regions of Gansu and Yunnan province. This research has contributed to a first of its kind study in China, which compared the development of 3 to 5-year-old children from the megacity of Shanghai with children from a coastal region of Zhejiang and the regions of Yunnan and Gansu.

In Yunnan, the research has followed the same group of 11,000 children twice during the year 2018 and 2020 and the results are supporting the province’s work to improve early childhood outcomes.

“Overall, we can see improvement in the children’s development, which is a good thing,” Assoc. Prof. Song said.

“We’ve had very good cooperation from the Yunnan Provincial Bureau of Education. They have been very supportive and they also want to change, and they trust our Institute to get better evidence-based policy formation.” In conjunction with the China Development Research Fund, Assoc. Prof. Song has also used the eHCI to confirm the benefits of a program to recruit preschool teacher interns to village kindergartens in the Hubei province, near Beijing.

The China Institute for Educational Finance Research’s use of latest smartphone and tablet technology to implement the eHCI was a welcome development for Professor Sally Brinkman and her team at the Telethon Kids Institute.

“It’s great for people to know that the eHCI works effectively whether parents and caregivers are using paper-based surveys as we’ve done in developing countries in some Pacific Island nations, or they are filling out the questionnaire via an app like was done in China,” Prof. Brinkman said.

“China’s experience shows that it’s wonderful to have the support of technology when dealing with large populations of children, however limited access to technology is not a barrier to using the eHCI to research and support childhood development.”

eCHI in action in rural China